During the final days of CRUSH, club members were privileged to be given an opportunity to stand back and really look at the place we call home.

Thanks to the Bundaberg Regional Art Gallery, we had our own little part to play in their Wide Bay High Desert II Exhibition, an international exchange project between two countries involving twelve artists responding to the unique culture and landscapes of the Wide Bay in Queensland and the High Deserts of New Mexico.

Club members added an extra dimension with their words, and a little music.

Back in the day, one of Australia’s most respected wordsmiths, Vance Palmer, was born (1885) in Bundaberg. He spent his early years here before being educated in small towns across Queensland – his father was a teacher. After that, Vance travelled the world learning his writing craft. He’s known for his poetry and essays, and for his journalism, but wasn’t against writing pot-boilers (eighty-one during a nine month stint in London), serials and music-hall sketches.

He was in France when the First World War broke out, and came back to Queensland. He said of the country:

Beyond the horizon, or even the knowledge, of the cities along the coast, a great, creative impulse is at work — the only thing, after all, that gives this continent meaning and a guarantee of the future. Every Australian ought to climb up here, once in a way, and glimpse the various, manifold life of which he is a part.

By night Bundaberg reminds one of a coastal town in the Southern States of America, the wide streets, with their heavy foliaged trees the smell of tropical fruit in the air, the sense of open doors and windows-all these things suggest Carolina.

There is a faint restlessness abroad. Voices echo dimly from shadowy verandas and balconies and there are the thousand little sounds and movements that speak of heat.

So what is it about Bundaberg and the Wide Bay… 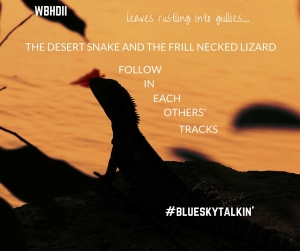 A curved stick in the middle of the road moves to become a live being. In another time the goanna could have been king on his world without any fear.

Red sand blowing creates new
blue haze laying above the tree tops
sand scraping against itself
leaves rustling into gullies.
The scent of sandy wind meets the aromas of the bush.

The slow, deep, muddy river approaches the city from the west, widening into a respectable, significant waterway traversed by long, important, busy bridges – both rail and road.

It skirts the CBD, refuge for fishing boats and pleasure craft, moving on past the mill – ever-widening as it reaches the port, the large bulk sugar ships and over-crowded marina.

Ever widening, still muddy, on it goes until at last the river merges, disappears, in the vast South Pacific Ocean. 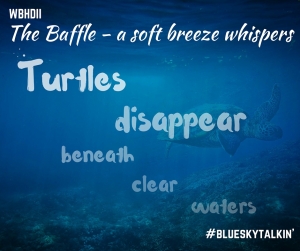 The soft breeze coming off the Coral Sea whispers through the leaves of the majestic she-oaks.

A turtle raises its head and takes a gulp of air, letting out a whoosihng sound that seems to reply to the oaks, and then disappears beneath the clear waters of the Baffle.

It’s calm waters gather momentum as the Baffle reaches out through the estuary mouth and tumbles headlong into the mighty ocean.

Cane green against a blue sky. 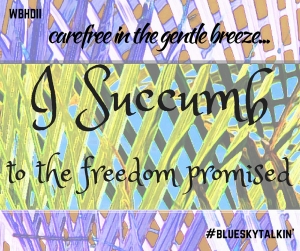 Perfect tips flop, carefree in the gentle breeze, and thrash, wilding, in the wind.

I succumb, like an addict, to the freedom it promises.

Skimming. Ducking. Diving. I glide inside my imagination.

I see across the breadth of the earth, feeling the desert heat before the sea envelopes me in its coolness.